Is there some kind of brunch rehab for serial (cereal?) offenders?

Because I think I need it…

Driving to Worsley in the relentless January drizzle on an early saturday morning is actually more pleasant than you might think.

There’s something quite calming about the noisy yet gentle splatter of rain drops on the windscreen and catching the tell-tale signs of morning mortality come to life as the village slowly wakes up. Fluffy clouds of smoke billow out of the chimneys of the chocolate box houses whilst a man walks with purpose in his raincoat after retrieving the morning paper.

Despite it being a thoroughly wet and windy morning, my friend, a Worsley local, and I decided to brave the rain and bumble along to George’s, only a 30 minute walk or so from her house, for a spot of brekkie.

Arriving promptly at the opening time of 10am, we stood like keen beans outside the door and were welcomed in by the host. We were given the pick of the dining room and nestled into our spot, immediatly ordering pots of tea to warm our frozen hands. 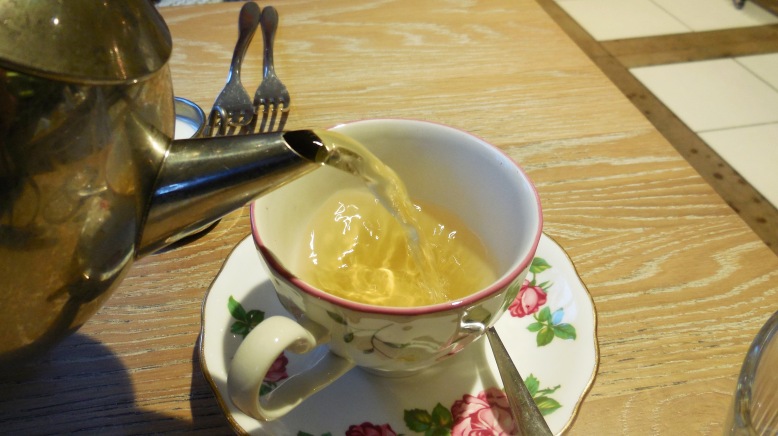 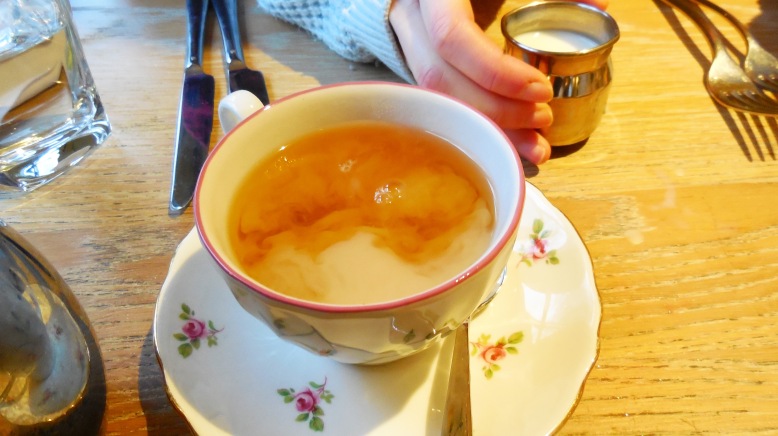 The morning menu offers quite the array of brunch time treats. There’s your usual suspects, the full breakfasts, the avo toast; with the occasional bacon, brie and cranberry toasted wild card thrown in to add a real indulgent edge.

Having worked up an appetite from our morning jaunt, we opted for George’s Breakfast, along with the Mushroom, Blue Cheese and Spinach omelette, agreeing to split the goods between us. 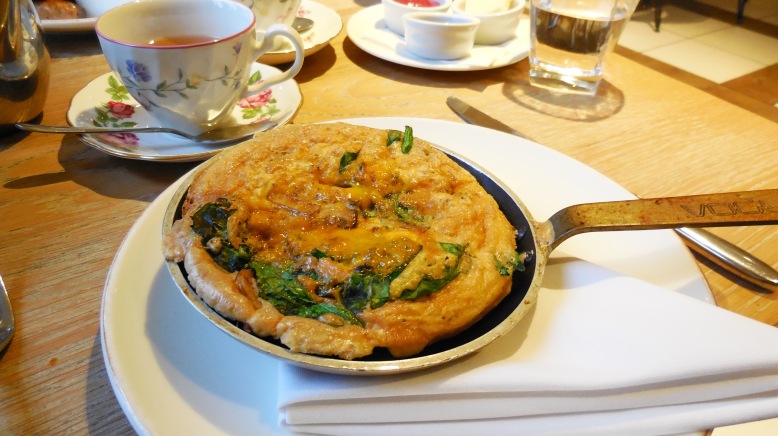 The omelette arrived in a charming rustic pan-for-one, still slightly bubbling from the heat of the cooker, aromas of melted, molten cheese hinting at its promised deliciousness.

George’s Breakfast was a wonderful-looking beast, holding all the components and more besides, to make up a gargantuan way to start to the day. Granted, it wasn’t the prettiest thing piled up on a plate, but frankly it wasn’t around long enough to judge too harshly.

We divvied up our eats equally and hungrily set to work.

The omelette was a classic creation, soft and mild in appearence but with dynamic flavours from  sharp and intense bites of blue cheese and the mushrooms adding a humble, nutty taste. The texture was perfect and the portion sized excellently if you’re looking for a light bite (if you’re particularly greedy like me however, I would definitely recommend the inclusion of a side or two to truly satisfy your appetite).

George’s Breakfast was particularly scrumptious, from the chewy, rich texture of the black pudding to the meaty bites of chipolata sausage. The bacon had been taken off the fryer at ample moment to secure a rasher that was both crispy and softly sweet from brushes of maple syrup.

The potato rosti was a surprising highlight and an enjoyable change from a hash brown (of which my heart still ultimately belongs to. Sidenote, would it be possible to live in a house made of hash browns?) Each bite was just as satisfying as the last as I broke up savoury forkfuls of the plate with sweet, crunchy bites of brioche bread which I had joyfully ladened with thick spreads of salted butter.

We proudly conquered our platefuls, leaving nothing but crumbs and remnents of a ketchup splodge as evidence of our plentiful spread.

As brunches go, this was quite a splendid one and a great alternative location if you don’t feel like venturing into town.

The service as always, was top knotch. Felicity, our server was kind, funny and attentive and the kind of gal we’d happily invite out to future brunch dates with.

You can find George’s on Barton Road in Worsley, directly opposite the canal which provides a fantastic post-brunch stroll. A new possible go-to of mine, but that’s enough from me, om-a-lette you find out for yourself.