Waking up to an unexpected, gloriously sunny Saturday morning calls for one thing and one thing only.

I rolled over lazily to find my phone which had fallen in between the mountains of books I keep by my bedside and eagerly sent a message to my favourite foodie, Chloe.

A friendship of few words, but affirmatively, all the right ones.

Meeting each other out front less than an hour later, dressed in our (questionable) Saturday best; we headed in to find ourselves a spot.

First greeted by a proud selection of homemade cakes

And fluffy scones ready for the taking.

Hushing our inner-plea’s which insisted on cake for breakfast, we bypassed the sweet treats and pottered upstairs to find a table for two, drenched in morning sunshine.

The service was slow, but we imagined that the Tea Hive, like us, was still in the process of waking up – we chattered over the juttering noise as the Espresso machine percolated into life and old tins of cutlery were plonked onto tables.

We made our drink orders and perused the menu, looking for the perfect dish to start our day.

The hot chocolate may look simple, but don’t be fooled by its average appearance; the cocoa beans had been blended with Nutella to make nothing short of a liquid dream. If you’re partial to a sweet thang (and who isn’t really?) Order this.

My peppermint tea was ever so slightly less luxurious…but hey! What my beverage lacked in indulgence made up for in nervous laughter thanks to the inclusion of a frighteningly comical teapot. 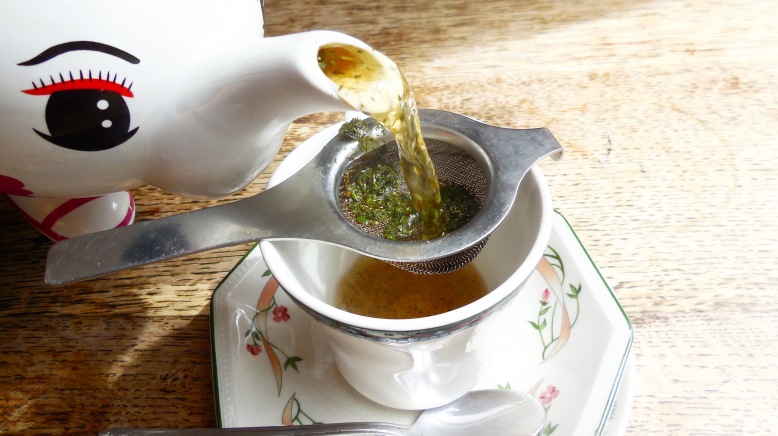 Sufficiently hydrated, we placed our order and settled in for a chat.

Getting lost in conversation, we chatted, gossiped and giggled until we were interrupted by our grumbling tummies.

I checked my watch and grimaced, almost 50 minutes had past since making our order and still not a sausage in sight.

I made eyes with our waitress and asked her if it was on its way; she wasn’t particularly concerned about our wait but my pleading, hungry eyes prompted her to check.

During this time, the tables around us had begun to fill up with the usual suspects, fellow brunch sourcers and local Chorltonites uniformed in Breton t-shirts harbouring similar breakfast cravings.

No apologies, but no worries, brunch was ours now.

I went for Eggs Twisted.

Whilst I adore hollandaise, I felt drowning my breakfast in the golden nectar would outshine the soft flavours of my breakfast and so opted out of the suggested sauce and plumped for homemade beans instead.

The eggs gazed up at me in a promising manner, practically pleading to be popped. I took my knife and held my breath, poking at its pale casing with the edge…

I dug in to my plateful, stopping briefly to be mildly miffed that the food was slightly under lukewarm.

“Like it’s been waiting for 10 minutes under a heat lamp!” My friend agreed.

Temperature aside, the flavours were extremely pleasing. Cool chunks of avocado, thick slices of squeaky grilled halloumi, the garlicky flavour from the mushrooms marrying together with the richness of the beans; I was happy, but also considerate that this was nothing that couldn’t be recreated at home.

My co-diners Eggs Benny was satisfactory.

“Nothing to really write home about…and a couple of degrees warmer would have helped!”

Following a final sour note of almost being charged for items not ordered by our table, we left feeling a mixture of fullness and disappointment; never the desired post-brunch effect.

Would I visit Tea Hive again? Sadly not unfortunately; living in a city which is full to the coffee cup brim of bodacious brunch locations, Tea Hive needs to seriously up its game to content with its competitors. But with a bit more TLC for its customers and a better system in place, Tea Hive could be a contender for a must-visit out-of-city breakfast nook.