When it comes to British cuisine, I really don’t think we give ourselves credit for the marvellous morsels we’ve concocted over the centuries.

There is always a place for a pie (just wait until my next post!) No one can deny the comfort of a humble crumble; and did you ever meet a soul who could pass up a scone?

When it comes to classic British grub, comfort is key; it has the ability to turn those missed-the-bus-stepped-in-a-puddle-then-ran-into-my-ex kind of days around; pulling you into the warmest and most familiar of bear hugs simply with a piping hot plateful. But apart from your family kitchen, where on earth can you muster up such a feast?

Sam’s Chop House is something of an institution in Manchester; a worldly wise pub, it’s the kind of place you can pop in for a quick pint and leave hours later with six new best friends. It’s THE pre-match destination, where all kinds of folk gather to share high spirits and guzzle down a bevy or two; but you’d be a fool to think that this place is merely just a watering hole for sports enthusiasts.

I wandered into Sam’s on a particularly miserable Saturday afternoon; the place was packed full of Rugby-enthusiasts, keen to get in a pint in before kick-off, warming the cool, cobbled surroundings with friendly jeers and hearty guffaws.

I wedged myself through the scrum, desperate to find salvation from the storm outside in the form of a hot meal and a round or two with my ma and da.

You can pre-book to be served in the separate dining room, but if it’s atmosphere you’re after, I recommend sticking where the action is, pulling up a pew and choosing from the more limited but carefully crafted bar menu.

We chose from a selection of classic platefuls and meals with a modern flair. Keeping things simple with Roast Beef and Horseradish sandwiches; 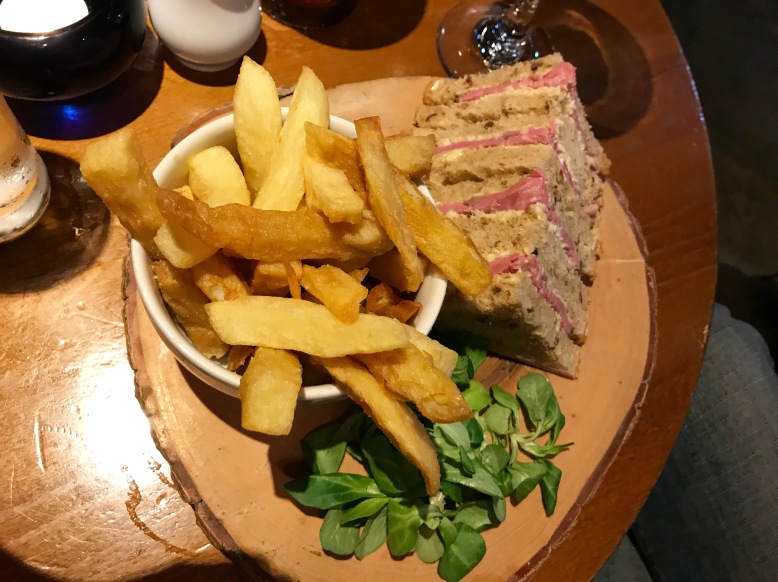 Simple and satisfying; buttered bread, tender, meaty cuts of beef and lashings of horseradish for a smoky kick.

The nations favourite, you’ll be served a sizeable beer-battered whiteling rather than cod which offers a flaky yet more meatier white fish. Sensational against the crackles of crisp, golden batter and irresistible when combined with a dollop of their homemade tartar sauce. Served with mushy peas, softly sharpened with a liberal vinegar drizzle and proper chips. 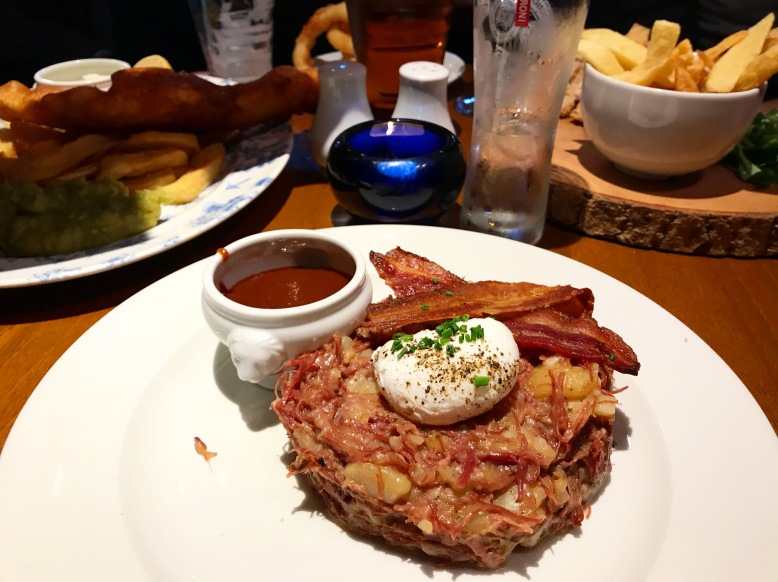 THE reason for my visit, their Hash had been taunting me on social media and has been the talking point of a fellow foodie friend for several months who insisted I make time to try.

A large patty, packed with pulled beef brisket, rich in succulent meat flavours and softly boiled potatoes. Thick chewy bacon rinds sit atop of this masterpiece and is topped off with a perfectly poached egg, whose yolk drips through the pulled brisket pooling into a river of golden nectar.

The brown sauce accompaniment gives the dish an added sweet, tart taste without losing the traditional flavours. Simply superb and a sure fire way to improve your day when you’ve spent the afternoon battling with your brolly against the wind and rain of King Street.

Pre-book if you don’t have the luxury of a free afternoon, but if you’re happy to while a way an hour or two, I rather enjoy the post-entry scramble for a decent seat. The friendly locals will happily share their table and there’s always room to get merry while you wait.

Well, what are you waiting for? Chop to it!